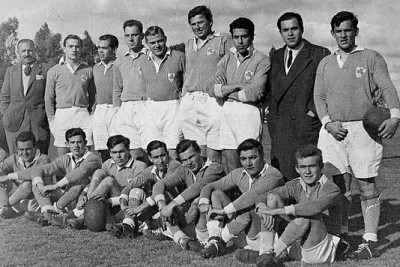 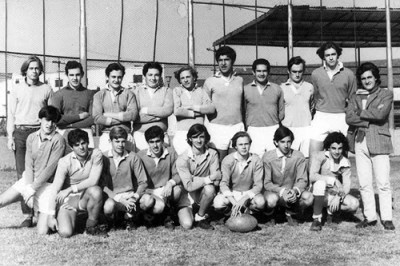 In early 1941 a group of junior members of the club led by Jimmy Ussher showed an interest in forming a rugby team in the Hurling Club. They invited José Daniel Moché to a meeting to explore the feasibility of taking up rugby. Moché himself was a former player with the first division at Olivos Rugby Club, and had a connection to Hurling through his wife’s family. A nucleus of a team began to practice the game from mid-1941 onwards under the management of Moché. To meet the requirements for affiliation to the Rugby Union of the River Plate, the predecessor of the current Union of Argentine Rugby (UAR), they needed to play a number of friendly games against affiliated clubs before they could formally seek union membership.

Their first competitive match was held on 17 May 1942 in Villa Devoto, against Lomas Athletic Club. Hurling’s first try in competitive rugby was scored by Guillermo ‘Mozo’ MacAllister with Sean Sill making the first conversion. The visiting team, steeped in a long tradition of rugby, won 19-5. A second friendly took place two weeks later on 31 May 1942 against St. Andrew’s College in Llavallol, Lomas de Zamora. As a novice rugby club, Hurling received much help and assistance from other clubs such as Porteño Athletic Club (a club which itself was founded mainly by Irish-Argentines), who allowed them to use their pitch in Palermo, as the Hurlingham site was still under development. They later also used the grounds of the Buenos Aires Cricket and Rugby Club. It would be 1948 before Hurling acquired its own grounds, as mentioned above. Media support was also forthcoming, in particular from Hugo Mackern, a freelance journalist who worked for one of the leading English-language newspapers The Buenos Aires Herald and the sports magazine El Gráfico.

Hurling became an official member of the River Plate Rugby Union in 1943 and began to compete in the tournament of the Third Division in the same year. It played its first official match on the grounds of Porteño Athletic Club on 9 May 1943 against Kangurú Rugby Club, losing by 17-3. In their first year they came fifth, just behind Obras Sanitarias. The team included South African Rybeck Elliott, who had first come to Argentina as part of the Junior Springboks in 1932.

At that time in the history of rugby union no substitution of players was allowed. Not being able to alternate meant that it would be difficult to develop the talents of the younger generation of players. Hurling overcame the problem by joining the Catholic Rugby League (LCR) in 1943, an organisation which ran in parallel to the River Plate Union. In 1945 Hurling came second in the tournament organised by the LCR.

The early 1950s was a time of great progress for the club in rugby, despite the setback of the clubhouse fire. The first junior team was created in 1953 and later that decade Hurling made its first tour at the invitation of the Tucumán institution, Lince Rugby Club, to open their new playing pitch. It also played another game with a fledgling team from the city of Concepción, Concepción Rugby Club, now Huirapuca Rugby Club. By the early 1960s the Club had started to reap rewards. In 1963 the junior team were runners-up in the UAR Reserve Division Championship. This formed the nucleus of the team that would go on to win the Third Classification in 1966 against Banco Nación, gaining promotion to the third division of the Ascenso championship. The specialist rugby magazine Tercer Tiempo devoted significant coverage of the ascent of Hurling in the world of rugby.

We are a club stemmed from the Irish community in Argentina.